If you’re one of those obnoxious, macho types who makes a big show of snacking on hot peppers for the shock value—keep it up! It looks like chili pepper hotheads may be less susceptible to inflammation, diabetes, prostate cancer, and heart disease. Plus, all that spicy hotness chases away congestion, and it even (ironically) helps to prevent stomach ulcers.

Native to Central and South America, chili peppers were introduced to Asia in the 1500s and have been a cornerstone of cuisines in both those parts of the world ever since. In the West, the heat of chili peppers is measured using the Scoville Organoleptic Test, named after Wilbur Scoville, the chemist who devised it in the early 1900s. It sounds very fancy and technical but, in fact, the Scoville method is a subjective process involving subjects who sip diluted solutions of ground chilis and sugar water. In other words, the Scoville Method isn’t much more scientific than the Pepsi Challenge®. There are now more scientific ways of measuring chili heat, but the Scoville method is still the one mostly used by the food industry.

Asian countries don’t use the Scoville method; instead, they rely on the general rule of thumb that the smaller a chili is, the hotter it is. Again, not so much with the science, but it makes sense when you consider this: the hottest part of a chili pepper actually is not the seeds, but the white membrane where the seed attaches inside the pepper. Larger peppers have proportionately less of this membrane than smaller ones, so they are generally milder. We probably all think the seeds pack the punch in hot peppers because they sit in such close proximity to the membrane and absorb its heat, and then they often remain whole in pepper sauces and condiments. 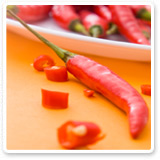 The fiery goodness of chili peppers comes from capsaicin, which has been found to inhibit substance P, associated with the inflammatory process. The hotter the pepper, the more capsaicin it contains. Researchers are looking at capsaicin as a treatment for arthritis, psoriasis, and diabetic neuropathy. It seems counterintuitive that chili peppers would inhibit the inflammatory process, since handling them in the kitchen can irritate your fingers, and too many of them in the salsa can make your head feel like it’s on fire, but there you have it.

Some veteran travelers to countries where the freshness of food can be questionable make it a point to eat food as spicy as they possibly can—that spice invariably coming from fresh or dried chilis—in order to ward off illness and boost immunity. Chili peppers have lots of beta-carotene, vitamin A and vitamin C, and they kill bacteria you may have ingested.

The capsaicin in chili peppers is also a thermogenic: it causes heat production and heat production burns calories. Even sweet red peppers increase the body’s heat production for several minutes after they are consumed. Certainly there are more efficient ways to lose weight than stuffing your face with hot chili peppers! But isn’t it nice to know that adding more salsa might help you burn that burrito off slightly faster?