Most neighborhoods in Los Angeles – and the rest of the country – seem to have a frozen yogurt shop. Pinkberry®, Red Mango®, Kiwiberry, Céfiore®, you name it – they’re in strip malls, shopping centers, office complexes – even airports, hotels, and casinos. Frozen yogurt is touted as being low in calories and having lots of healthy flora for your intestinal health. So what’s the deal: Is frozen yogurt good for you – or too good to be true?

The history of frozen yogurt

Dannon® made the first frozen yogurt in the 1970s. It was sold in supermarkets as a frozen treat on a stick – usually a variation of Dannon’s tart berry yogurt, but coated with chocolate or carob. Later, companies like TCBY® (The Country’s Best Yogurt) began processing yogurt in soft-serve ice cream machines, adding artificial flavorings, along with sugar or artificial sweeteners, in an effort to duplicate popular ice cream flavors. They also offered toppings like chocolate chips, M&M’s®, and crushed candy bars. Supermarket brands like Häagen-Dazs® and Ben & Jerry’s® also began adding frozen yogurt flavors to their ice cream lines in the 1980s. 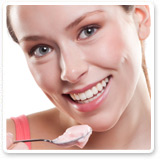 In 2005, Pinkberry opened its first store in Los Angeles, and the chain quickly grew to more than 50 stores, spawning hosts of imitators. Many say Pinkberry is a knockoff of the Korean chain Red Mango, but whoever imitated whom, Red Mango has benefited from Pinkberry’s opening up the American market to this new/retro style of yogurt. Pinkberry yogurt is a back-to-basics formulation, similar to what Dannon peddled in the 1970s. Pinkberry yogurt is more tart than the sweeter TCBY-style soft-serve yogurt, and is usually offered in just a few flavors (currently original, chocolate, salted caramel, coconut, mango, pomegranate, and watermelon). These gourmet yogurt shops offer mainly fresh fruit toppings, as well as some less nutritious ones, and they all claim the health benefits of the high levels of favorable bacteria in their yogurts, like Lactobacillus and L. acidophilus.

Yogurt is generally healthy. It has calcium, is low in calories and fat, and contains cultures that are helpful in maintaining intestinal health. A small serving of original Pinkberry (1.5 servings, as figured on their nutritional information page – a “large” is considered to be 3.8 servings!) contains about 150 calories, 4.5 grams of protein, no fat, and about 15 percent of your daily value of calcium. The fresh fruit toppings are unsweetened and add only 10 to 35 calories per scoop. So, generally speaking, Pinkberry yogurt makes for a reasonably healthy snack. Old-school TCBY has a few more calories, but is not dissimilar to Pinkberry in its nutritional makeup. However, keep in mind that most of these calories come from added sugar, so they’re more likely to turn into stored fat in your body if you don’t burn them off. While its calcium content is also fairly decent, you’ll get nearly twice as much calcium from regular unfrozen yogurt than you’ll get from the frozen kind. Regular yogurt also contains more protein.

Things really go off track, however, when it comes to toppings other than fresh fruit. If you’re going down to the gourmet yogurt joint, crumbling a candy bar or two on your yogurt, and adding a dollop of syrup to boot, it’s pretty hard to claim you’re “eating light.” Obviously, this is also true if you’re going to the supermarket and getting a pint of Ben & Jerry’s fro-yo with chunks of cookie dough or brownies swirled in. You’d think common sense would kick in here, but most of us have somehow fooled ourselves into thinking that toppings don’t count, when in fact the number of empty calories they contain is usually much higher than the calorie total for the actual yogurt. And when you get your yogurt in a cone instead of a cup, you’re adding even more empty calories to your dessert or snack – 120 calories for a typical waffle cone.

In short, frozen yogurt isn’t terrible for your diet, but it isn’t a miracle food either. It’s a much better option than ice cream (which has high levels of saturated fat), but yogurt doesn’t necessarily have less sugar. It’s also better than cookies, cake, or candy, but it can’t hold a candle to fresh fruit as a food that can satisfy your sweet tooth while helping to make you healthy at the same time. Simply put, it’s better for your figure and your pocketbook just to have a bowl of fresh fruit mixed with your favorite plain unfrozen yogurt.

However, if you just can’t get past your craving for a frosty delight, try one of these 5 healthy frozen treats!