Most of us are aware that we’re in the midst of an obesity epidemic. And while we can’t open a newspaper or turn on a computer without a reminder, the problem is still continuing to grow. A recent article in the UK newspaper, The Guardian, predicts that two-thirds of children and 9 out of 10 adults will be obese by 2050 in the UK. As the statistical leader of this growing (pun intended) trend, what does that say about the United States?

Critics may call those projections inflammatory, but looking at even the most conservative numbers should cause concern. Nationwide, obesity rates range between 17 and 30 percent, with some demographics exceeding 40 percent. Estimated health care costs of this epidemic range in the billions. Life expectancy rates for our youngest generation are lower than those of their parents for the first time in recorded history. The leader of the epidemic, the USA, has seen its status fall from one of the world’s healthiest countries to the least healthy country in the developed world. We’re far beyond a time when bickering about statistics and numbers even matters. One look around at a mall, an airport, or a school informs us that things aren’t as they should be. There is no longer a question of whether it needs national attention. We need to reverse this trend ASAP. But we can’t change what we don’t understand, so let’s examine the major questions and concerns we have about obesity. Then, we’ll take a look at what we can do about it.

Is the problem exercise or diet related?

It’s both. There is no question about obesity following the pattern of fast food dispersal; all you have to do is look at a map to see that the trend follows these restaurants. However, the latest studies are showing that even with the addition of Big Macs and Big Gulps, caloric consumption is not going up as much as exercise levels are coming down.

Recent studies by British medical journal The Lancet, the Archives of Pediatrics & Adolescent Medicine, the Journal of Clinical Endocrinology & Metabolism, and the American Journal of Clinical Nutrition have all consistently shown that exercise is the central determinant of whether children are overweight. The figures show that kids are consuming approximately 3 percent more calories than they did in the 1970s, but getting a whopping average of 20 percent less exercise. And obese kids are 70 percent more likely to become obese adults.

But even though lack of exercise takes the brunt of the responsibility, it doesn’t mean that dietary habits should be ignored. The increase in the number of calories eaten doesn’t reflect the type of calories that are consumed. For example, various studies estimate that soda makes up around 15 percent of the caloric intake of teenagers and around 10 percent that of adults in America. The health implications of these statistics are dire, as this habit makes it nearly impossible for a person’s diet to be balanced—and that’s before we even consider how much calorie-free soda is being added to the mix.

The following study exemplifies the solution, which requires changing both our exercise and dietary habits. In Colac, Australia, 1,800 children, aged 2 to 12, followed a program that included a restricted diet (no carbonated drinks or sweets) and increased exercise. Results included a 68 percent increase in after-school activity program participation, a 21 percent reduction in television viewing, and an average 1 kilogram weight reduction compared to the control group.

For richer and for poorer 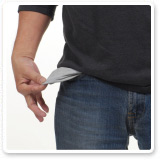 Historically, only lower-income groups had a major problem with obesity. This statistic is rapidly changing. In the early 1970s, 22.5 percent of people with incomes below $25,000 were obese, while just 9.7 percent of people with incomes over $60,000 were obese. Obvious contributing factors were education, more involved parenting, and having the means for being proactive toward child care. Today, however, the obesity rate is growing the fastest among Americans who make more than $60,000 a year.

Since higher-income groups tend to eat “healthier,” or at least can afford to change their diets more easily, this is another signal that our exercise habits have become dangerous. Some telltale signs of this reversal of fortune are based around money. Kids with the greatest access to TV, computers, and video games have more excuses not to get outside and move. Another curse of the privileged is the declining number of children who walk or bike to school. There’s nothing like trading in a couple hours of movement each day for playing with a Game Boy® in an idling SUV for regressing a child’s metabolic process. In addition to a declining number of recess periods and poor school lunch programs, we’re setting our children up with an ideal recipe for type 2 diabetes.

The number of obese children is still rising among all socioeconomic classes, and it will keep growing unless lifestyle changes are made and people become more aware of the situation. No economic class is immune to obesity. Especially hard on the lower classes is the fact that the least healthy foods also tend to be the cheapest, making it very difficult for children from that socioeconomic background to eat properly. Cheap foods tend to have a higher sugar content than natural, healthy food. There is only one way to combat a high-sugar diet, and that’s with a lot of rigorous exercise.

It’s about more than a ripped body 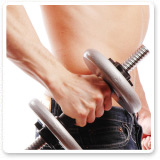 It’s not just about looks, as obesity affects more than your physique. It increases your risk for a number of diseases, including diabetes, stroke, insulin resistance, and hypertension. Obesity carried into midlife may also have damaging effects on the brain.

According to the Centers for Disease Control and Prevention, an estimated 61 percent of obese young people have at least one additional risk factor for heart disease, such as high cholesterol or high blood pressure. Additionally, children who are obese are at greater risk for bone and joint problems, sleep apnea, and social and psychological problems. Obese young people are more likely than children of normal weight to become overweight or obese adults and are, therefore, more at risk for associated adult health problems, including heart disease, type 2 diabetes, stroke, several types of cancer, and osteoarthritis.