One of the things I miss most about my homeland, Peru, is the food. I remember being at my grandparents’ beach house during the summer, sitting on front porch facing the ocean, eating fried plaintains with cheese with my grandpa while my grandma worked wonders with the freshly picked chilies from her garden for dinner. Looking back, I realize some of the traditional dishes that were near and dear to my heart weren’t exactly the healthiest of nutritional choices, so I decided to take it upon myself to find ways to make them lighter. With this goal in mind, I met with Ani Aratounians, Beachbody’s new in-house nutritionist (see next article for an interview with Ani!), and shared with her my mission to “healthify” some popular Latin dishes. After much chatting and delicious experimentation, Ani and I came up with three healthier versions of very typical Latin dishes. Each new version is packed with flavor and shouldn’t disappoint even the most discerning of palates.

Where and how can I get the right chilies?

These recipes include some chili peppers that might not be familiar to some people, but both Ani and I feel that replacing them with anything else would end up taking away too much from the authenticity of the dishes. We really want you to have the full experience, just as if our grandmas were cooking for you. Your best bet for finding the right chilies is to check the ethnic food aisle of your local supermarket or Hispanic specialty market, if there’s one near where you live. If you can’t find them fresh, dry ones should be just as delicious. If you can’t find them at a store near you, look online at Web sites like Chili Pepper Madness or Marx Foods. (Remember that when you cook with hot, spicy chili peppers, you need to be careful—wear gloves and be careful not to touch your face or eyes while working with the peppers. In fact, if you have contact lenses, it’s a good idea to take them out before you even touch the chilies.) 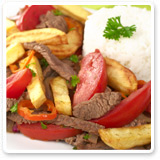 One thing you might not know about Peru is that during the 19th century, the country experienced an infusion of Chinese indentured servants, who helped to diversify both Peru’s population and its cooking, including what has become one iconic Peruvian dish, lomo saltado, a sautéed beef dish that’s traditionally cooked in a wok with soy sauce . . . and French fries! To lighten this recipe, I’ve replaced the beef with chicken or shrimp, lost the French fries in favor of sautéed jicama, and significantly reduced the amount of oil used in the dish.

Preparation
Place a wok over medium heat. When heated, place 1 teaspoon of oil in wok; add garlic and limo chili pepper and sauté for 2 minutes. Turn heat to high and add chicken or shrimp; cook until almost done. Season with salt, pepper, and cumin.

Remove chicken or shrimp from wok and set aside.

If needed, add 1 teaspoon of oil to wok; add onions and sauté until barely soft; season with more salt and pepper if desired. Add a few drops of vinegar and continue sautéing until vinegar has evaporated. Remove onion (it should still be a little crisp) from the wok and set aside with chicken or shrimp. Repeat with tomato (heat just until hot, then remove quickly before it gets too soft), then jicama.

When jicama is done, return all cooked ingredients to wok. Add amarillo chilies and soy sauce and cook for a minute or two until chicken or shrimp is completely cooked (for chicken: no pink left in middle; for shrimp: firm and opaque white all the way through). Place on serving dish and garnish with freshly chopped cilantro. Serve immediately, accompanied by cooked quinoa (a very nutritious grain-like seed that’s native to Peru, and which you can now find at most health food stores and supermarkets—it can be cooked the same way as rice). Makes 6 to 8 servings.

Important Note: You can also replace the shrimp or chicken with firm tofu to make a vegan dish. Also, if jicama is not readily available in your area, you can replace it with baked sweet potato fries, which should be added at the very end of the cooking process. 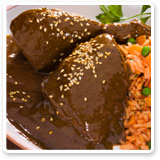 Mole poblano is probably one of the most famous Mexican dishes that originates in Puebla, south of Mexico City, and its long preparation time is well known, simply because there are so many different ingredients and steps. Mole is versatile, because it can be made ahead of time and frozen in small batches to be used in the future, over turkey, chicken, shrimp, tamales, enchiladas, etc. Traditionally, every ingredient is fried in lard, then blended, and then sometimes fried again! Some people claim that unless lard is used, the flavor just isn’t the same. I beg to differ, because I’ve done it without lard using a fraction of the fat and oil in the traditional recipe, and it still turns out great! There are so many complex flavors in this dish, the lard isn’t a major factor in the taste.

Preparation
Soak dried chilies in hot water to soften them. Toast almonds, anise, cloves, cinnamon stick, and sesame seeds in a dry nonstick frying pan over medium heat so they release their fragrant oils. In a large skillet, heat 1 tablespoon oil, then add garlic, onions, tortillas, baguette pieces, raisins, almonds, anise, clove, cinnamon, pepper, tomatoes, and 1/2 cup sesame seeds and cook for a few minutes. Drain chilies and add to pan; cook for 1 more minute. Remove from heat and place mixture in a food processor or blender with 1 cup vegetable broth and blend, then press through a medium mesh strainer to obtain a smooth puree. Put puree in a thick pot or Dutch oven, add cocoa powder, and cook over low heat for 5 minutes, until reduced to a paste. Add remaining 3 cups vegetable broth to pot and simmer partially covered, stirring occasionally, over medium-low heat for 20 to 30 minutes, or until thick enough to coat a wooden spoon. Taste and season with salt and sugar (it should be slightly sweet). Enjoy over chicken, turkey, pork, black beans, eggplant, seitan—or whatever meat, vegan protein, vegetable, or side dish you prefer. Garnish with remaining sesame seeds. Makes up to 16 servings of sauce.

Important Note: Prepared according to these directions, this sauce is vegan! 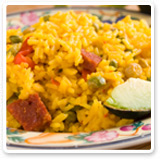 This very popular Puerto Rican recipe is a staple of that small Caribbean island’s home cooking. If you cooked it in the traditional way, you’d need to work out like champion Olympic swimmer Michael Phelps to burn all the calories in each serving, but this updated version makes it a much more nutritious—yet still heartyd—meal to consume after an intense workout for us non-Olympic athletes.

Preparation
Place olive oil and paprika in large saucepan and heat over medium heat. Add onion, green pepper, garlic, and turkey bacon. Cook for 4 minutes, or until vegetables are soft but not browned. Add cilantro and tomato and cook for 2 minutes or until juice from tomato cooks down almost completely. Add ham and quinoa and cook for 1 minute. Add pigeon peas and water; season with salt and pepper to taste. Raise heat to high and bring to a boil; allow to boil until most of liquid has been absorbed. Reduce heat and cook 20 more minutes. Makes 4 servings.

By Luz Plaza (with assistance from Ani Aratounians)